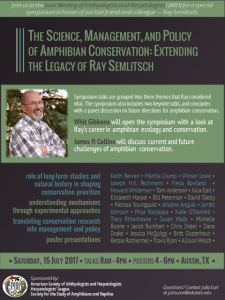 The goal of this symposium is to celebrate and extend the legacy of Raymond D. Semlitsch by highlighting work at the cutting edge of amphibian conservation biology.  Ray’s career was cut short with his untimely death on June 10, 2015.  Ray’s work touched on a number of areas in herpetology, but amphibian conservation washis passion and the focus of much of his research for the last two decades.  Ray’s accomplishments included editing a book titled Amphibian Conservation and publishing more than 240 manuscripts.  Ray’s work had profound effects on our understanding of the mportance of small wetlands, terrestrial buffers around wetlands and streams, movement ecology, and the effects of land-use on amphibians.  Ray took risks through the implementation of large-scale field experiments and his involvement in conservation and policy, but these risks paid off.  This symposium will bring together top researchers in amphibian conservation to celebrate Ray’s legacy, highlight work that pushes the envelope, and discuss research needs to move amphibian conservation forward into the future